Complete guide on how to grow carnations, including how to plant, grow from seed, propagate, fertilize, and more.

Wondering how to grow carnations? Look no further. Carnations are simple flowers to plant and grow. Carnations come in a wide range of colors, and there are both annual and perennial varieties. With a little preparation and maintenance, you can have beautiful carnations blooming in no time.

Carnations at a Glance

Fact: Carnations are a favorite to add to lovers’ bouquets as a sign of love and adoration, but be careful to omit the yellow carnation, which according to flower, meaning legend are a sign of disdain. You may also wish to exclude the striped carnation, which has come to mean refusal.
Source: Powell, Claire. The meaning of flowers: a garland of plant lore and symbolism from popular custom & literature. Boston: Shambhala;, 19791977. Print.

When to Plant Carnations

Carnation is the common name of the Dianthus family of plants that has over 300 different species within it. When to plant carnations for best results in your area depends on what kind of carnation you are attempting to grow. Carnations come in three main varieties: annuals, perennials, and biennials. Carnations can be propagated in all areas of the world throughout the calendar year, but they are native to the temperate regions and summers of Europe and North America.

When to Plant Outdoors

Annuals and perennials should be planted outside between the end of autumn and the last frost. If growing from seed instead of cuttings, these seeds must be covered to prevent them from being damaged by the cold. Biennials should be sown in late spring or early summer. When planting outdoors, all carnations should be spaced at least eight inches apart. Carnations require full sun and well-drained soils, so do not plant them outside in your area during seasons that are typically rainy or overcast. Further, do not plant carnations until you are confident that the final frost of the season has ended.

When to Plant Inside

All three major types of carnations can also be grown inside. Annuals and perennials should be planted approximately ten weeks in advance of when they are needed. They can be transplanted outdoors after the final frost of the season. Biennials, on the other hand, should be planted eight weeks in advance and should be transplanted outside in August. All styles of carnation have an approximately two week germination period.

How to Grow Carnations from Seed 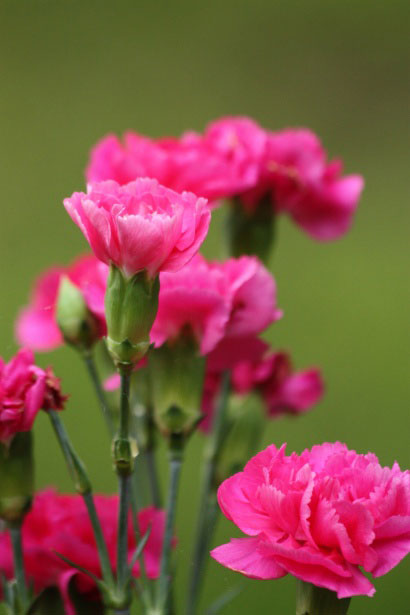 Carnations are famous as the centerpieces for floral arrangements, bouquets, and the stars of many gardens. Their blooms last a very long time, from early spring to summer. Depending on the temperature of the summer months and the local climate, they can bloom well into September.

They possess a spicy clove-like fragrance and come in the basic colors of white, pink, and red. They are known as one of the most easily cultivated flowers to handle. Growing carnations from seed is relatively simple. They are very resilient and resistant to drought.

Preparing Your Soil to Grow Carnations

The first step to successfully growing carnations is to figure out the most suitable place to plant them. The ideal spot gets a lot of sunlight and has well-drained, slightly alkaline soils. If you are unsure whether your soils are alkaline, you can buy a soil pH tester at your local garden store. If you find that your soils are too acidic, try adding garden lime or wood ash to it. It is also a good idea to add some fertilizer to your planting mix as you prepare it. Right before you plant, make sure to rake the soil to remove any rocks or sticks.

Purchase your carnation seeds ahead of time. Make sure that the location of planting has plenty of exposure to at least eight hours of sunlight every day. The fewer days of sunshine, the longer it will take for the seeds to sprout.

You can plant the seeds directly into outdoor soil when temperatures are between 50-65 degrees during the day and 40-50 degrees at night, or you can begin the seeds indoors and later transplant them to an outdoor garden bed.

If you are planting them outdoors, plant them during the early months of spring. Wait until the initial spells of frost are over. It is also essential that you do not soak the soil with an excess amount of water. You will literally drown the seeds, otherwise.

Cover the seeds with ¼ inch of soil and space each deposit of seeds about one foot apart from each other. Once they have been established, they can be propagated during the fall by division.

Keep seedlings moist but do not overwater. The best way to kill carnations is to overwater them.

Fertilize your plants once a month and water them one or two times per week. They prefer full sun along with very fertile, well-drained soil. They can grow 16-18 inches tall. They are perfect garden borders. If any insect problems occur, treat them early to avoid later issues. Perennials should be mulched during winter months.

How to Grow Carnations

Where to Plant Carnations

Carnations, also called dianthus or “pinks,” grow best in full sunlight to partial shade. They need at least 4-6 hours of sunlight per day. They require plenty of room for air to circulate around stems so that the plants do not fall victim to fungus. Otherwise, they are very hardy. The soil should be well-drained and fertile but not too rich. These plants prefer slightly alkaline soil (6.7-6.9). Wet soil will cause yellow foliage and may rot the roots, thus killing the plants.

Fertilize your plants once a month with an organic liquid fertilizer or compost and water them one or two times per week. They prefer full sun along with very fertile, well-drained soil. They can grow 16-18 inches tall. They are perfect garden borders. Perennials should be mulched during winter months.

Once established, carnations are drought resistant. A light spray of water once or twice a week is sufficient unless the weather is scorching and dry. Never allow water to stand around the roots of carnations. Established perennials will withstand a light frost before going dormant for the winter.

The primary disease with carnations is fungal, and for this reason, air circulation around the plants is crucial. Apply fungicide at the first sign of disease.

How to Propagate Carnations

Learning how to propagate carnations involves discovering the three most common methods of propagation for all perennials. There are many different species of carnations, and you will find that these methods will work with all of them. Layering, seed, and division are the three methods most used.

Layering a carnation involves laying the flowering stem over until it is in contact with the ground, and pinning it in place until roots form. At this point, it may be removed from the parent plant. Make sure there is a node in contact with the ground, and remove any flowers from the stem you are cultivating. The resulting child plant will be a clone of the progenitor.

Starting a carnation from seed will result in a hybrid of both parents, allowing selective breeding for desirable traits. Sow the seeds into moist potting soil indoors 4-6 weeks before the last frost date, covering with about 1/4 inch of soil. Keep seeds moist, and they will begin germination in 2-3 weeks. Once the danger of frost has passed, the starts may be moved outdoors and hardened off before planting into the garden.

The division of mature carnations again results in a cloned plant. Carnations will begin to overgrow themselves and produce fewer blooms after three to four years of growth. Both to propagate the plant and to continue optimal growth in an existing plant, divide in the late fall. Using a sharp garden spade, cut the matted roots cleanly into three to four sections. Leave one in place, and remove the divisions.

About Seth 58 Articles
Hey, Seth here! As a homesteader and self sufficient farmer, my main interests are in gardening, tree care and lawn care. There is nothing I appreciate more than having a beautiful and healthy home garden. I spend most of my days gardening, caring for my small orchard and a few animals that I keep. I thoroughly enjoy working on my garden as well as sharing tips and experiences with people who have the same passion. My education in environmental science and technology has also led me to explore agriculture from a different perspective and exchange information with people from around the world.