Complete ash tree growing guide including how to plant, prune, grow, when to prune, and when to plant ash trees.

Ash trees are part of the olive family of plants, and they grow in North America and much of northern Eurasia. The leaves from ash trees are considered deciduous, and these trees are valued for their beauty and wood.

There are several common types of ash trees. The white ash is the largest type of ash tree found in North America. Some white ash trees grow up to 120 feet tall, with a trunk that is around 3 feet wide. The green ash is another common type, which grows to approximately 70 feet tall. The green ash has smaller leaves than the white ash. Other varieties of the ash tree include the pumpkin ash, blue ash, and black ash. The most massive ash tree found in the world is the Australian mountain ash, which is the fourth tallest tree that has ever been recorded. 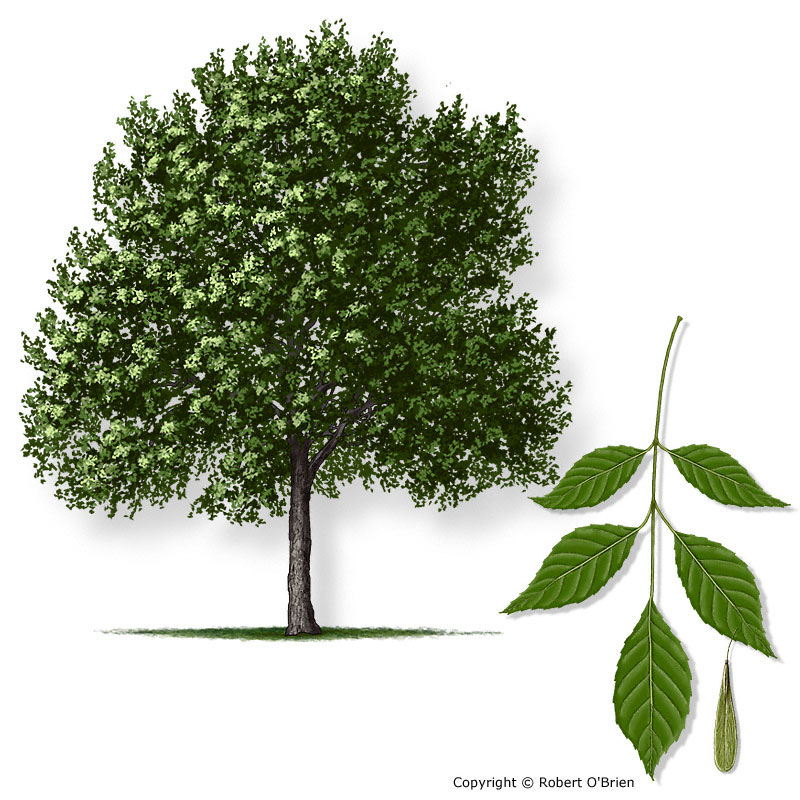 Ash wood is highly treasured because of its strength, color, and durability. It is often used to build wood products, including tools, axes, tennis rackets, baseball bats, and furniture.

If you have ash trees on your property, it’s essential to be aware of conditions that affect the health of your trees, including ash tree insects and diseases. Knowing what conditions can impact your trees can raise your awareness and help prevent future problems.

Unfortunately, this is nowhere near a complete list. Some of these insects destroy the ash tree leaves while others bore into the bark and kill it from inside. Leaves that appear ragged and holes in the bark of your trees are usually the first indicators of an infestation. Insecticides can generally be used to bring infestations under control, although it might be necessary to call in a professional to assist with proper application.

While some of these diseases are more prevalent in other parts of the country than others — for example, ash rust most commonly affects trees east of the Rocky Mountains — ease of travel has allowed the diseases to spread beyond their normal range. Diseases due to fungal infections can be treated with fungicide to control the spread of the fungus. Badly infected trees may have to be destroyed in order to protect healthy trees. For some diseases, including Mycosphaerella leaf spots, no effective method of control has yet been found. 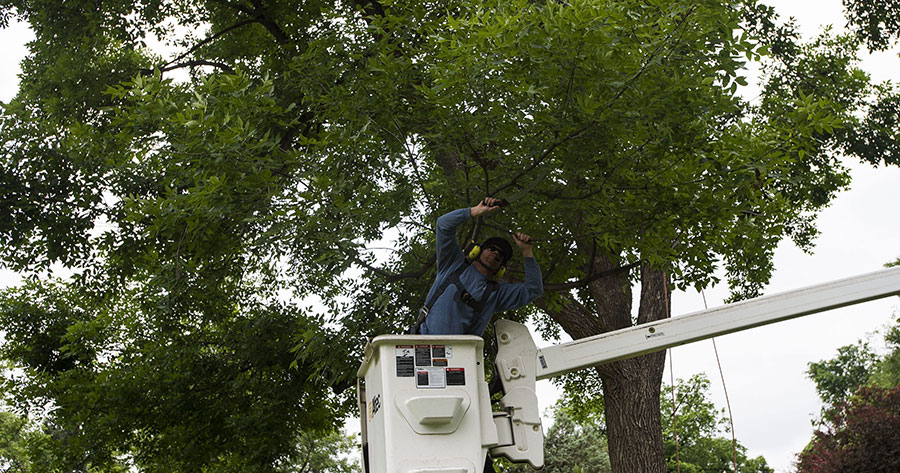 1. Fertilize the tree annually in the early spring or fall to promote vigorous growth during the growing season. A fertilizer that especially formulated for ash trees is recommended.

2. Prune ash trees early in the spring and throughout the growing season to remove any broken, dead, or diseased branches. Prune out any branches that cross or rub to increase airflow.

3. Pull weeds around the circumference of the tree on a regular basis to avoid the competition for nutrients and other resources. Be sure to dig out the entire root system of weeds in order to prevent a recurrence. Also, rake the leaves regularly.

Ash trees are particularly susceptible to emerald ash borers and other insect pests. These borers create holes in the plant.

Ash trees may also develop tree diseases such as ash yellows or Verticillium wilt. Ash yellows disease is caused by a phytoplasma and is characterized by a loss of vigor 2 to 10 years before the tree’s death. An infected tree grows slower, the leaves may be smaller, and the length between the leaf and the stem is shorter. The summer coloring may become paler, and fall color may develop early. Cankers may form on branches and the trunk. Sprouts that look like brooms may appear on branches or on the trunk near the ground. Cracks in the trunk may appear as well.

Verticillium wilt is a fungus that will also cause tree decline. It is characterized by branch tip death, leaf loss, slower growth of leaves, and a slow decline over the years.

Since the is no cure for any of these diseases, removing affected areas of the trees, or the entire tree may be necessary.

An ash tree is a handsome and robust addition to a landscape, and correct ash tree pruning can promote the health of this specimen.
When you prune, an ash tree is just as important as how you prune it. After all, pruning an ash tree incorrectly can introduce pests and diseases and subsequently weaken the tree. In the case of an ash tree, an ounce of prevention truly is worth a pound of cure.

The first pruning an ash tree should receive is at the time of planting. Examine the young tree to ensure that it has a central leader or a sturdy central branch that will lead growth. Remove any branches of equal size that will compete with this central branch.

As the ash tree grows, prune to remove any dead, diseased, or broken branches. These problematic branches can harbor fungi that produce decay, and which can affect other parts of the tree. Occasionally, pruning of live branches is mandated to allow sunlight and air to circulate within the tree’s canopy since that can reduce the incidence of ash tree problems.

If you’ve inherited an ash tree, prune to remove any branch “stubs” which only serve to trigger weak growth in the ash.

The Emerald Ash Borer is the nemesis of ash trees. This borer, a beetle that invades the bark of the tree, destroys the tree’s nutrient-carrying pathways. For this reason, avoid pruning an ash tree during June or July because the chances are then higher of being infested with the ash borer. 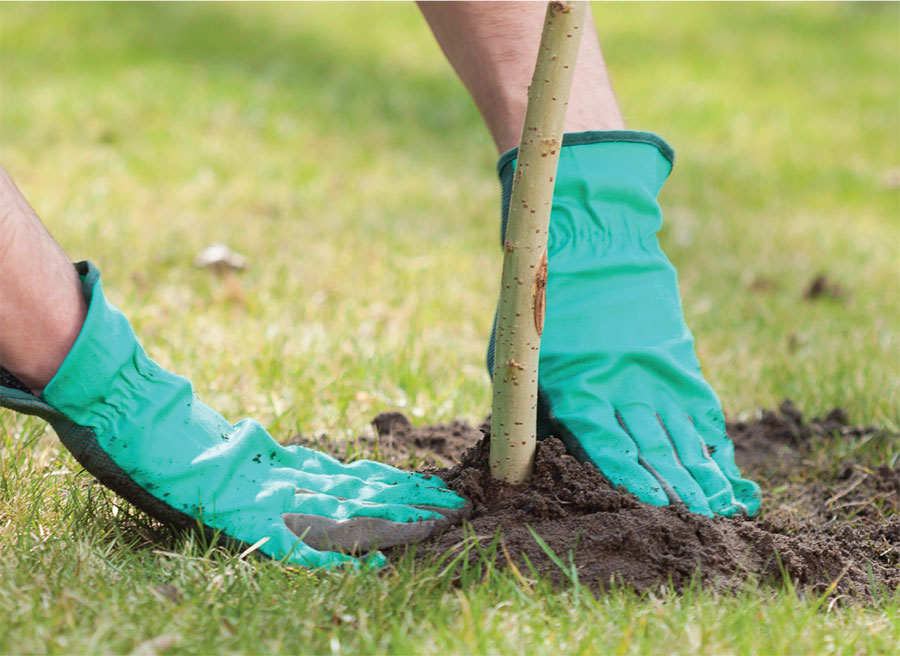 Ash tree planting and care is relatively easy in North America as these types of trees do well in moderate climates, such as exists in Canada, the United States, and much of Europe. There are over sixty types of trees in the Fraxinus family. These include European Ash trees, Japanese Ash trees, Whit Ash, and Blue Ash trees.

When you plant an Ash tree of any variety, you want to do so in an area where they’ll be exposed to as much direct sunlight per day as possible. Six hours is a good minimum to keep in mind. You also want to plant in an area that has rich, deep soil that irrigates well. You need to give the roots plenty of room to expand downward and don’t want water sitting on the roots. If you purchased your ash tree from a garden store or are transplanting it from somewhere else, make sure to bury the root ball completely. Otherwise, your tree will be in danger of root rot.

Like all newly planted trees, Ash trees need plenty of water to remain healthy. To get the most out of your watering efforts and to prevent run-off, form a four-foot dirt mound around your tree. Make the dirt wall a couple of inches higher than the ground right in front of the tree. You also want to make the wall a few inches thick to prevent it from being washed away. Now, when you water, the dirt wall will keep the water centered around your tree, allowing the most volume as possible to penetrate down to the roots of that particular tree. Water it as much as necessary to keep the area around the tree moist, but not flooded.

Once your ash tree has established itself and is growing strong, you’ll want to do a few things to keep it healthy.

1) Purchase a fertilizer for ash trees and use it every year at the beginning of the growing season.

2) Weed that four-foot area around your tree as often as necessary to keep it clear of any unwanted volunteers.

3) Prune away any dead, diseased, or damaged branches every spring to encourage new, healthy growth.

About Seth 58 Articles
Hey, Seth here! As a homesteader and self sufficient farmer, my main interests are in gardening, tree care and lawn care. There is nothing I appreciate more than having a beautiful and healthy home garden. I spend most of my days gardening, caring for my small orchard and a few animals that I keep. I thoroughly enjoy working on my garden as well as sharing tips and experiences with people who have the same passion. My education in environmental science and technology has also led me to explore agriculture from a different perspective and exchange information with people from around the world.